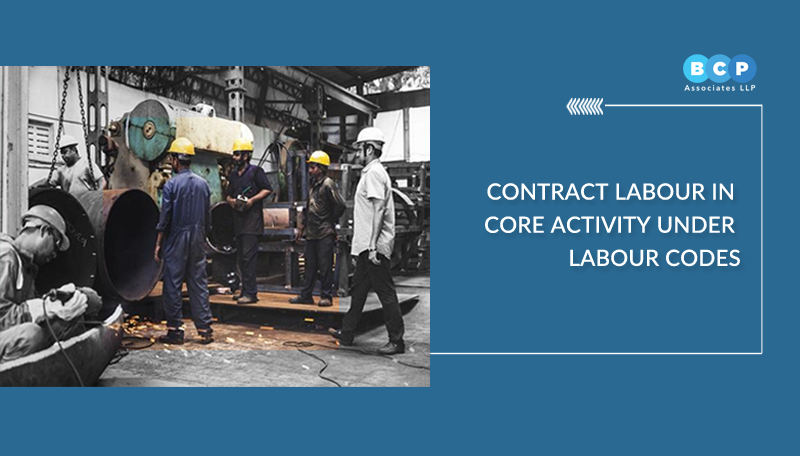 What is Core Activity?

Given the above definition of Core Activity, there are certain exceptions. The principal employer can engage contract labour in core activities in the following circumstances:

Usually, companies engage contract labour in their core activities in the manufacturing sector. Many global MNC’s in India whose primary nature of work is IT/ITES are engaging IT vendors as contract labour to carry out their core work or the same or similar kind of work to that of their permanent employees. Such companies engaging vendors in their core activity exposes them with risk of non-compliance with the laws and may attract imposition of penalties under the New Codes.

To mitigate the risk, companies should examine and consider a few aspects before engaging contract labour;

If the contract labour is engaged on a project basis, then the contract will come to an end at the completion of the project. If the contract labour is engaged based on business needs (or hourly basis), it might be to meet the contingency of sudden increase of volume of work in the core activity which needs to be accomplished within a specified time. The same may be justified from the perspective of requirements of the Code and benefits of exceptions as mentioned above may be taken.

Given the above, companies will have to gear up to justify their position regarding engagement of contract labour in the core activity within their organizations after the Labour Codes come into force.

1 thought on “Contract Labour in Core Activity under Labour Codes”

Mr. Chandrashekar Shetty is a Senior Labour Law Compliance Auditor at BCP Associates and has audited multiple client companies across India. He is also a member of our senior legal advisory practice. Previously he has worked as Deputy Controller, Manager-Industrial Relations and Industrial Relations Officer in KPTCL, Bangalore for more than 30 years. Prior to this, he has dealt with Legal, Personnel and IR matters including Wage Settlements, Grievance Machinery, Manpower Study and Social Security Compliances for about 10 years. He is a Faculty member of Labour Law, HRD Centre, KPTCL Bangalore.

Mr. Shetty holds a B.Com. and L.L.B. degree, Post-Graduate Diploma in Business Administration, Diploma in Public Relations from Bangalore University and PG Diploma in Industrial Relations & Personnel Management from Bharatiya Vidya Bhawan. He is enrolled as Advocate in Karnataka Bar Council and is a Govt. Arbitrator of Chit Funds in Karnataka.

S Venugopal Rao is an experienced labour law and service matters expert and is a member of the senior advisory team at BCP Associates. Having joined the chambers of Mr. B C Prabhakar in 2012, he is knowledgeable and well versed in multiple employment and labour law topics. S Venugopal Rao holds a Bachelor’s degree in Science from Karnataka University, Dharwar and Bachelor of Law from Bangalore University. He enrolled as advocate in Karantaka State Bar Council in 1976. He joined the chamber of Sri. Kolachalam Srinivasa Rao a leading civil advocate. After practicing for 6 years at Ballari, he joined Orient Paper Mills, Orissa (of G P Birla Group). He was designated as Manager (Law) under the Factories Act in 1995. In 1999, he joined Andhra Pradesh Paper Mills Rajahmundry as Manager Legal and was subsequently elevated as Dy. General Manager (Legal). As Factory Manager & Legal Head, he oversaw compliance of Factories Act and Rules there under towards safety, health and welfare, including compliance under Pollutions and Environmental laws and Explosives Act, etc. Additionally, he is well acquainted with Environment Management System ISO 14001: 2004, Occupations, Health and Safety Series 18000:1999. As Legal head in APPM he has briefed and appeared along with Senior Advocate before Appellate Authority constituted under Water (Prevention & Control of Pollution) Act. He retired from the services of Andhra Pradesh Paper Mills in 2011. As legal head he has handled important cases both in Labour and Civil and has experience in drafting and vetting Contracts, Agreements, Lease Agreement, Conveyance Deeds, , Affidavits and scrutiny of several legal and other documents, Preparing and settling Petitions, Appeals, Plaints, Written Statements, Rejoinders, Affidavits and Written Arguments etc. for submission/pleadings for various legal proceedings.

C.K. Devappa Gowda (CKD) is an Advocate and Labour Law expert. He holds a Bachelor’s Degree in Science from the University of Mysore and a Degree in Bachelor of Law from Bengaluru respectively. He also holds a Diploma in Social Service Administration from the National Institute of Social Science, Bengaluru. After completing his studies, he had enrolled as a Advocate and initially practiced in the Civil Code attached to the office of BCP. He then worked as Personnel Officer in Chemicals and Textile Manufacturing Industries for 5 years. Thereafter took up employment in one of the largest Public Sector Bank. He has worked in different parts of the country and has extensive experience in the cross country IR domain. The significant part of his service was at corporate level overseeing and implementing HR policies and practices and management of IR. He has been a member of personnel committee of Indian Bank Association. After retirement from service, Mr. Gowda has been working with Mr. BC Prabhakar’s firm for the last 12 years. He has expertise in all areas of people management, drafting of documents relating to service matter including the settlements under the ID Act. He has dealt with all employment laws including appearance before the Courts, Tribunal and Authorities under the different Labour Laws. Mr. Gowda is one of the senior Labour Law experts at BCP Associates.

Srijata Ghosh serves as external member on the Internal Committee of several Companies across various sectors. She handles all kinds of POSH related matters including investigations and inquiries. She provides Training on Sexual Harassment across all verticals for Managers and Senior Management, General Awareness for all employees and Internal Committee members on the legislation (The Sexual Harassment of Women at Workplace Prevention, Prohibition and Redressal Act, 2013). She also formulates Policies for Prevention of Sexual Harassment at Workplace (“POSH”) and advises Companies on setting up of their Internal Committees. Srijata is involved in providing Legal Advisory services on POSH and other labour law matters for various clients.

Srijata completed her B.A.LL.B from M. S. Ramaiah College of Law, Bangalore University in 2009. Srijata is a member of the Karnataka Bar Council since 2010. She is also a member of the Gender Sensitivity Sub Committee of Karnataka Employer Association (KEA).

Caroline Lobo has been with BCP Associates for the past 2+ years. She has been handling matters and Inquiries related to the POSH Act including conducting inquiries and trainings/awareness programmes for Senior Management, employees as well as members of the Internal Committee on the POSH Legislation (The Sexual Harassment of Women at Workplace (Prevention, Prohibition and Redressal) Act, 2013 (“Act”) to address Workplace Harassment of Women. She is a member of the Internal Committee for many varied companies and organisations and has reviewed and scrutinized numerous hearings and inquiries on matters relating to sexual harassment at workplace.

She has also handled matters relating to employer-employee related Enquiries, wherein she has reviewed and conducted hearings and enquired into the matters and has guided the Internal Committee and provided guidance in providing recommendations to the management. She is also a Member of the Gender Sensitivity Sub-committee of Karnataka Employer Association (KEA).

Prior to joining BCP Associates, Caroline has has a wide range of experience in corporate, commercial and contract law, mergers and acquisition and has undertaken drafting, vetting, negotiating and finalizing legal and commercial transactions. She started her career in litigation then moved onto the Corporate sector. In the span of 13 years, she has worked at Chambers of Advocate Jayashree Murali, Krishnamurthy and Co. Legal Consultants, Colt Technology Services and Oracle India Pvt. Ltd. She always had a keen interest in Women and Child related issues. She has worked with Child Welfare Committee and NGOS’s. In addition, she has worked with Swasthi Health Resource and Centre, where she was the External member to the Internal Committee (IC). She worked closely with the committee in strategizing, planning, reviewing and implementing the assigned tasks, which included building material to raise awareness against sexual harassment at workplace. Further, she has been involved in conducting inquiries into matters related to sexual harassment at workplace.

Caroline earned her Law degree from University Law College, Bangalore, from where she graduated in the year 2005.

Rashmitha Venkatachalam Das is the External Member of the Internal Committee of several reputed Organizations across various sectors. Handling complex inquiries has been her forte and she is extremely passionate about it. She is actively involved in providing Training on Sexual Harassment (Prevention, Prohibition and Redressal) Act, 2013 across all verticals for Managers and Senior Management, General Awareness for all employees and Internal Committee members. Rashmitha possesses capabilities in delivering sessions in Hindi and Kannada, in addition to English. She has formulated Policies for Prevention of Sexual Harassment at Workplace (“POSH”), advised companies on setting up of their Committee. Rashmitha is involved in providing Legal Advisory services on POSH for various clients spread across diverse sectors. She has also been handling domestic enquiries for various clients.

Rashmitha possesses experience both at Law Firms and Corporates in various capacities. She started her career at Krishnamurthy and Co, Legal Consultants and then moved on to work as an In- House Legal Counsel with Companies such as Biocon Limited, Columbia Asia Hospitals Private Limited, Adecco India Private Limited. With a long stint in the Corporate side, Rashmitha decided to pursue further education in Law with a specialization in Labour and Employment Laws. She has rich experience in drafting, vetting and negotiation of various types of contracts, providing legal opinions and has driven the team in formulating process and procedures and their implementation. She has drafted several employment related policies in Corporates. Rashmitha has been a part of various key committees in Organizations and assisted committees in scrutiny of documents pertaining to human organ transplant as well as clinical trials.

Rashmitha holds an LL.M. in Labour and Employment Laws from University Law College, Bangalore, which she completed in the year 2018 with Two Gold Medals. She is also a Rank Holder at the University. She has completed BA, LL.B. from Bangalore Institute of Legal Studies, Bangalore University in the year 2009. Rashmitha is a member of the Karnataka Bar Council since 2009 and also a member of the Gender Sensitivity Sub Committee of Karnataka Employer Association (KEA).

Amrutha is also part of the labour law advisory and HR Policy practice and is actively involved in drafting opinions on various aspects of labour laws and formulate and review employment policies and procedure.

Amrutha completed B.A., LL.B. from Christ University, Bangalore in 2015. She is also a semi-qualified Company Secretary.

Prior to joining BCP Associates, Sunil has 10 years of post-qualification experience in diversified portfolios of advisory, drafting, policy analysis and dispute in the domains of contracts, general civil matters, employment law, competition law and construction arbitration matters. Sunil started his career as a Law Researcher in Delhi High Court. He moved on to be part of regulatory analysis team of CIRC, a unit of CUTS International. In addition, Sunil has been part of legal team of Jindal India Thermal Power Limited. He has also taught competition law, tax law and investment law at VIPS, Delhi.

At BCP Associates, Chandrakala has 12+ years of experience in conducting and managing labour law compliance audits of principal employer and contractors. She is also involved in co-ordination with many clients. She has conducted on-ground labour law audit for factories. She also provides support in advising vendors on labour law queries. Chandrakala is actively involved in research and providing valuable inputs to the firm pertaining to updation in labour law audit function.

Chandrakala started her career in litigation in chamber of Sri. Ashok where she was involved in drafting, pleading and appearance before Karnataka High Courts and lower courts on the criminal side.

Chandrakala completed B.A in Arts from Kuvempu University, Shimoga in 2003 and LL.B. from Mangalore University in 2006.